The annual Dainfern Lions Football Club prize giving took place at the clubs home grounds within the well-known Dainfern Golf and Country Estate this weekend. Soccer players young and not so old were all very excited to find out who will be this years “Golden Boot” boy and girl winner. The event was well attended despite many of the athletes excused themselves as they were competing in other sporting events. Nic Papas, Chairman of the club, thanked all the parents, congratulated the players on their achievements and especially the club sponsors namely Axtel Communications, Vodacom Fourways Mall, Mark White Nissan and Contract Car and Truck Hire. He highlighted the fact that without sponsorship, the 50 kids that compete in the club from Diepsloot will not be made possible. The sponsorship covers their kit, registration fees as well as transport to and from away games by taxi and runs for an entire year.

The Club player of the year 2017 (boys) went to Jordan Van der Westhuizen, son of singer, Amor Vittone, and has been playing at the club since he was a Dainfern Cub at the age of 5. He was selected together with another 8 fellow club footballers from Dainfern to represent the Rand Central League Football Association (RCLFA) Districts Team in Spain in July this year as a defender. In August, Jordan competed in the Internal District Tournament, this time he followed in his Nonno’s (Grandad’s) shoes and played as a goalkeeper. He excelled even there and has decided to play in that position ever since. A month later the team played in the Natal District Tournament and he was named man of the match in more than one game. An avid Liverpool supporter and a member of the Liverpool Supporters Club Gauteng, it is Jordan’s dream to take Mignolets position one day. 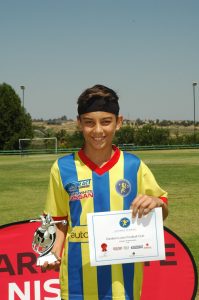 Anika Bruehwiler, player of the year 2017 (girls) excelled in many aspects as well. She has been playing with the boys for 3 years in a row now and has shown them that girls have what it takes as well says Papas. In 2017 the club announced it was going to begin taking in girls and as a result entered a u10 girls team. Anika was often called up to assist the all-girls team and has been success story ever since. The club runs from February to September and competes in the RCLFA league matches in those winter months and during October and November, summer season, skills, technique and basic training is the focus internally within the club. 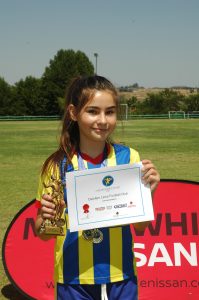 Registration for the 2018 season opens on the 1st December and is done online only via their website www.dainfernlions.co.za. If you stay in Fourways, Dainfern and surrounds, Papas says that Dainfern Lions welcomes you as the safest and most sought after soccer club in the Greater Fourways area. Boys and Girls aged 4 to 25 are welcome. Papas believes the importance of club football is what ensures this country can compete at international levels. All surrounding schools are also welcome to make enquiries as the club already has players from most of the schools that surround Dainfern. Dainfern Lions can be found on Facebook or send an e mail to [email protected]. 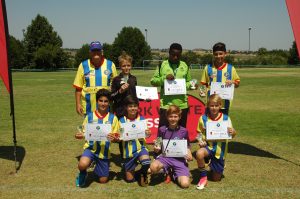 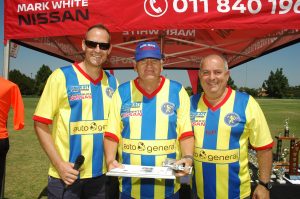